I managed to miss the 1 September post at the start of the month, when I planned to catch up on August as well. Whoops.

So what happened this month? Well, I’ve started using my Barclaycard for my business expenses too in an effort to reduce the number of credit cards in use.
My balance on the Barclaycard went up when I used it to pay AirBNB for an apartment we stayed in in Edinburgh. My wife and I went with some frieds for a few days at the end of August and found a nice apartment on AirBNB to stay at rather than a hotel. It cost us £25 per person per night, plus booking fee, it was £84 each for the whole trip. A hotel would probably have cost that per night (split between two). I also backed a Kickstarter project (the Nifty Drive).

Katie and I also celebrated our 1st anniversary and stayed at Wroxall Abbey for a night. Its a mansion home-turned-hotel so was really fancy and costs a fair few quid.

In September, I signed up for a trial of Experian Credit Expert to take a look at my credit score. I was pleased to see I have a rating of 909 (not sure what the scale is) and only one warning which was to do with the amount of credit I was using out of all available credit. I was amazed to see how much information was on my record. It showed me info on all my existing and previous bank, savings accounts as well as all my credit cards, together with a recently updated balance. It also shows you any companies that have done a credit search on you, and whether it was a full search of just a general check (things like insurance quotes show up here too). After seeing this I made the choice to do my best to clear two of my cards, being the Virgin and the LloydsTSB (the lowest balances). I was able to do this because I also made the decision to sell my car, the one I bought in April. I’ll be posting later about that process. For now, lets say that I got paid cash and some of that went to pay off the Virgin card which I will be cancelling once I’ve had a final zero balance statement.

I’m continuing to pay off the minimum payment on my CapitalOne card, and a little bit more on my Halifax card. Both these cards have about another year of 0% interest on them so will probably just carry on for a while longer.

So here’s the final figures for August and September.

and here is the chart for the year to date: 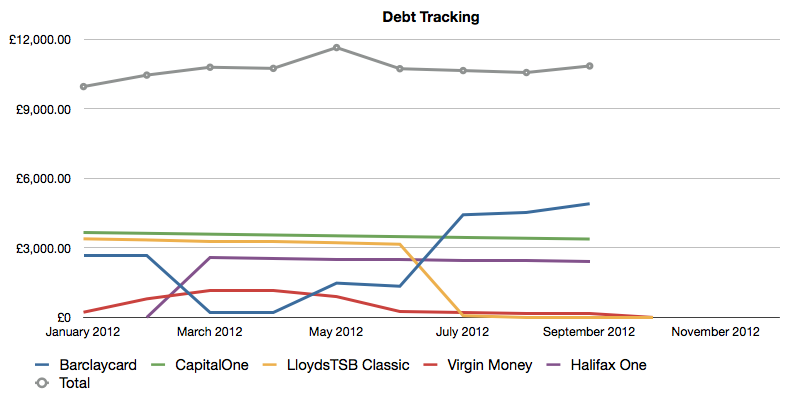